GENEVA (AP) — The Ebola outbreak in West Africa eventually could exceed 20,000 cases, more than six times as many as are now known, the World Health Organization said Thursday.

A new plan by the U.N. health agency to stop Ebola also assumes that the actual number of cases in many hard-hit areas may be two to four times higher than currently reported. If that’s accurate, it suggests there could be up to 12,000 cases already.

“This far outstrips any historic Ebola outbreak in numbers. The largest outbreak in the past was about 400 cases,” Dr. Bruce Aylward, WHO’s assistant director-general for emergency operations, told reporters.

Another new dimension, he said, is the difficulty of dealing with Ebola in large cities and broad areas.

The agency published new figures saying that 1,552 people have died from the killer virus from among the 3,069 cases reported so far in Liberia, Sierra Leone, Guinea and Nigeria. At least 40 percent of the cases have been identified in the last three weeks, the U.N. health agency said, adding that “the outbreak continues to accelerate.”

People gather next to a sign reading ‘NO DUMPING’ amongst rubbish at West Point, an area tha …

In Geneva, the agency released a new plan for handling that aims to stop Ebola transmission in affected countries within six to nine months and prevent it from spreading internationally.

The 20,000 cases figure, said Aylward, “is a scale that I think has not ever been anticipated in terms of an Ebola outbreak.”

“That’s not saying we expect 20,000,” he added. “But we have got to have a system in place that we can deal with robust numbers.”

Aylward said the agency is urging airlines to lift most of their restrictions about flying to Ebola-hit nations because a predictable air link is needed to help deal with the crisis. Air France on Wednesday canceled its flights to Sierra Leone.

Liberian soldiers patrol the seaside of West Point by boat, an area that has been hit hard by the Eb …

Nigerian authorities, meanwhile, said a man who contracted Ebola after coming into contact with a traveler from Liberia had evaded surveillance and infected a doctor in southern Nigeria who later died.

The announcement of a sixth death in Nigeria marked the first fatality outside the commercial capital of Lagos, where a Liberian-American man, Patrick Sawyer, arrived in late July and later died of Ebola. On Wednesday, Nigerian authorities said they have not yet eliminated the disease from Africa’s most populous nation but that it was being contained. 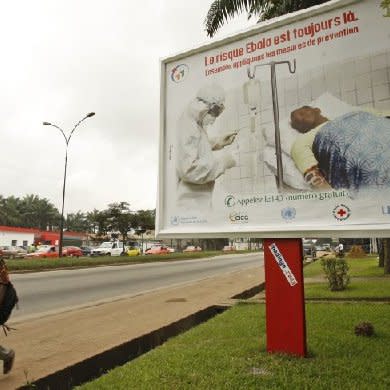 The doctor’s wife is in isolation after she started showing symptoms of Ebola, Nigerian Health Minister Onyebuchi Chukwu added. Morticians who embalmed the doctor are part of a group of 70 people now under surveillance in Port Harcourt.

This site uses Akismet to reduce spam. Learn how your comment data is processed.