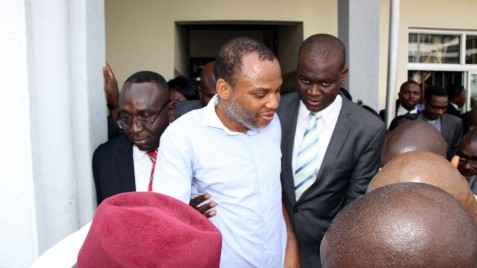 Tension is building up in the South-East and parts of South-South geopolitical zones following the continued detention of the leader of Indigenous People of Biafra, IPOB, and Director Radio Biafra, Nnamdi Kanu, who was, last Wednesday, discharged and acquitted by a Magistrate’s Court in Abuja of the treason preferred on him by the Department of State Security Services, DSS.

It will be recalled that Justice Ademola Adeniyi of a Federal High Court, also in Abuja, had, last Thursday, ordered Kanu’s immediate release from DSS detention.

Nnamdi was arrested on October 17, by DSS operatives, shortly after he arrived Nigeria from his base in the United Kingdom, which prompted over one month protests after he was arraigned secretly at Wuse 2 Magistrate’s Court presided over by Justice Shuiabu, who granted him bail on October 19.

Meanwhile, the youth wing of Ohanaeze Ndigbo had warned that the continued detention of the leader Nnamdi Kanu by the DDS, against court order, could spell doom for Nigeria.

The youth group under the banner of Ohanaeze Youth Council, OYC, expressed shock that four days after the Federal High Court, Abuja gave ordered Kanu’s unconditional release, the DSS had continued to hold him.

Similarly, reactions have continued to trail last Thursday’s shooting and killing of five members of IPOB by the Joint Task Force, compromising Army and Navy stationed at the Bridge-head area of the commercial city of Onitsha, Anambra State, who were jubilating the court order for the release of Kanu.
Among those who had so far reacted to the incident include the leader of Biafra Independence Movement, BIM, Chief Ralph Uwazuruike; the Ogirishi of Igboland, Chief Rommy Ezeonwuka, and other human rights groups.

Nerves frayed as Kanu’s not released

The leader of Movement for the Actualization of the State of Biafra, MASSOB, Uchenna Madu, has accused the DSS of deliberately continuing to detain Nnamdi Kanu against two court rulings ordering the security agency to release their leader unconditionally.

“The continued detention of Nnamdi Kanu by DSS after both Magistrate, Federal High courts have discharged and acquitted him of all the frivolous charges against him shows that Nigerian judiciary is not independent. The independency of the three arms of government is a complete sham, which portrays Nigeria as an undemocratic state.

“It is a sign of frustration on Nigeria because of Nnamdi Kanu, agitators for Biafra represents the very truth Nigeria knows but always avoids to identify with it. I know Nnamdi Kanu. He is a real Biafran, who can never succumb to intimidation, deviate or compromise.

“His illegal detention will worsen the already battered image of Nigeria. MAASOB will never relent in identifying with Nnamdi Kanu. We shall continue to press for his release with every legitimate action supported, backed by internationally recongised law, decrees and charters. MASSOB must maintain our non-violent stance, although we have found out that the DSS wants to re-arraign him on fresh trumped-up charges which we will resist,” MASSOB leader warned.

The Youth Wing of Ohanaeze Ndigbo in a statement by its National President of OYC, Mazi Okechukwu Isiguzoro, condemned the attitude of the DSS over the detained Biafra activist.

“Nigeria is sitting on tenterhook; the looming danger of renewed protests by Kanu’s followers, sympathisers and Biafra agitators is capable of consuming Nigeria and should be avoided. For us, Ohanaeze Youth Council, we are pleading with the Federal Government to, as a matter of sacrifice for the unity of Nigeria, release Nnamdi Kanu.

“This call has become necessary because it will be extremely difficult for us to continue to calm his followers and sympathizers whose see his detention as a provocation. We know how much effort it took us to prevail on IPOB and MASSOB members to stop their protests before the court ruling, and we don’t know what to tell them again as Kanu is still in detention four days after he was discharge by a court of competent jurisdiction.

“President Muhammadu Buhari should help save the country from unnecessary tension by prevailing on the DSS to release Kanu since the courts have discharged and acquitted him.”
OYC also called on the international community to intervene and save Nigeria from plunging into another avoidable civil disturbance instead of coming with aids to refugee camps.

The youth group appealed to Buhari, to prevail on the DSS to free the detained IPOB leader in the interest of peace.

Ohanaeze, also appealed to Biafra agitators and Igbo youths to remain calm as efforts were being intensified to secure freedom for Kanu.

Meanwhile, reacting to Kanu’s continued detention, Uwazuruike condemned the killing of unarmed civilians by the soldiers, adding that even if the jubilants blocked the road, it should not have been enough excuse to open fire and kill them.

The BIM leader wondered why the soldiers used live bullets on the crowd instead of using rubber bullets or even tear-gas canisters to scare the jubilants if at all they blocked the road.

Reacting to the development, Chief Ezeonwuka, who spoke to newsmen at the scene of the incident, also condemned the shooting and killing of unarmed persons with live bullets, adding that on the other hand, if it was true that the jubilants had blocked the roads, it was not proper.

“We don’t want shedding of blood here in Igbo land any longer and we don’t want more protests too. What are they protesting about and who are they shooting at? There is nothing to warrant shooting or protesting, particularly now that Nnamdi Kanu has been released by the court.”

Chairman of South East zone of Campaign for Democracy, CD, Uzor A. Uzor, called on the government to set up a panel of inquiry to ascertain the reason for the shooting and punish the culprits accordingly.

Also reacting, the International Society for Civil Liberties and the Rule of Law, Intersociety said, in a statement, yesterday, that the Commander of the Onitsha Military Cantonment and his Chief of Army Staff, COAS as well as the government of Anambra State, should be held fully responsible for the death, injuries and whereabouts of some missing citizens and the murdered members of IPOB members.

The statement by its chairman, Emeka Umeagbalasi, Intersociety said: “We have it on good authority that four to eight dead victims and 13 critically injured members of the public, who were shot dead and critically injured by the soldiers of the Onitsha Military Cantonment in the evening of December 17, 2015, at the Ojukwu Gateway, Onitsha Niger Bridge-head, have been taken away to unknown destination by soldiers of the Cantonment.

“The soldiers after perpetrating the heinous act at the Niger Bridgehead between 2p.m., and 3.30p.m., stormed the Multicare Hospital, on Limca Road, Nkpor, Anambra State, between 8p.m., and 9p.m., and abducted 13 critically injured citizens brought for treatment.

“The four dead citizens were also said to have earlier been taken away by the soldiers from the scene of the shooting. Till this moment, their whereabouts have remained unknown.”

Meanwhile, in his bid to exert his authority and ensure that charlatans do not infiltrate MASSOB, its founder and leader of Biafra Independence Movement, BIM, Chief Ralph Uwazuruike, had converted MASSOB into youth wing of BIM.

Uwazuruike said with its inauguration and appointment of its key officers, MASSOB, had been restructured and strengthened to continue with the non-violent struggle in the revalidation of a Biafran statehood.

A statement, yesterday, by BIM’s Deputy Director of Information, Mazi Chris Mocha, quoted Uwazuuruike as saying that before one could be admitted into the hierarchy of BIM, such an officer must have worked for MASSOB which is BIM’s youth-wing for at least, five years and above to be able to understand the principles of non-violence in the Biafra struggle.

The statement recalled the Biafran leader, Uwazuruike had at an enlarged special meeting of BIM/MASSOB, attended by Biafran elders-in-council, Biafran zonal leaders, Biafran regional administrators and directors, named Chief Solomon Chukwu as the leader of MASSOB, the youth wing of BIM, while Mr. sunny Okereafor and Great Agomo were named as MASSOB National Director for Information and MASSOB National Director for Seminar respectively.

This site uses Akismet to reduce spam. Learn how your comment data is processed.